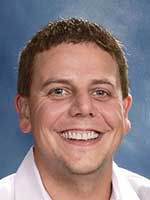 Josh and his wife, Christina, have been coming to St. James since 2010, shortly after they moved to Collegeville. They have two children, Taylor (7) and Samuel (3). Josh grew up in the Episcopal faith and was lucky enough to have his childhood minister who baptized him officiate his wedding to Christina in Kenebunkport, Maine.