Worship in the Episcopal Church is said to be "liturgical," which 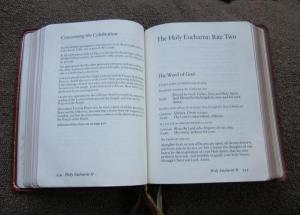 means that the congregation follows the same service and prayers from texts that don't change very much from week to week during a season of the Church year. In the pews you will find the Book of Common Prayer from which the service is drawn.

The Book of Common Prayer is one of the major works of English literature. Since its introduction in the mid-1500's it has exerted enormous influence on the religious and literary lives of all who speak the English language. The Book of Common Prayer has gone through a number of editions, not only in England where it originated, but in all the places where the various Churches of the Anglican communion are now active.

To someone new to the Episcopal Church the Book of Common Prayer may seem a bit daunting, but once it becomes familiar the rhythm of the service provides a freedom which is both satisfying and comforting.

It may be helpful to know that the large print in the text is the actual service. The smaller print gives directions to the ministers and people regarding conduct of the service. While some parts of the service are always the same, others change. At the Holy Eucharist, for example, two or three Bible selections are read. These change each Sunday, as do the psalms. Certain of the prayers also change, in order to provide variety. Page numbers for parts of the service printed elsewhere in the Book are usually announced or given in the service leaflet. Do not be embarrassed to ask your neighbor for the page number. As you become more familiar you will find the services of the Episcopal Church beautiful in their ordered dignity.